This past weekend contained yet another initial training module – but this time it was time to train an entire crew with upcoming BODYBALANCE®instructors.

Friday morning they were 16.
Straight after the master class (that’s pretty much the first thing that happens) one of the gals felt that BODYBALANCE® wasn’t her thing.
It was her very first time ever trying the class. She did have trained a lot of BODYPUMP® and BODYCOMBAT® though – which she loved – but fore some reason her gym told her to start with the BODYBALANCE®-training casue that is so much easier.

1. It’s not – it’s probably harder.
2. For me – attend an instructors training and never even tried that particular class or exercise – really strange.
3. If a person loves BODYPUMP® and BODYCOMBAT® and have done it a lot – why not go for that?

Which was exactly what I told her: go for the things you like.
That’s when you become good at it.

Then saturday morning – next chica came.
During the first day –  she felt that she wanted to keep BODYBALANCE® as her own training. But not teach in it. So she checked out.

So, in the end of the weekend it was 14 strong and long warriors left.
Just like I posted on my facebook sunday night; I’m equally amazed each time after a training – of how much you can develop and progress in three days with the right mindset and attitude. Thank you for your effort and hard work.

In this pic they’re only 14 – cause two ladies were in a bit of hurry to catch a flight. 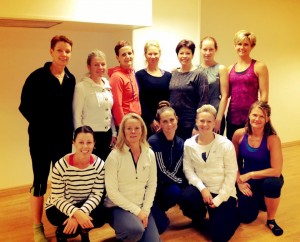