…of the fall-2011 have been flying by, 11 classes down – one more to go tonight. And then there’s tomorrow’s EXPLOSION obviously!

So yesterday, I first did my jazz… and because of some music issues yesterday I had to pick up an old choreo; Boys Boys Boys (Lady GaGa) and it was fun. It’s very girly, so I don’t know what the guys felt really, or – I do know how they felt, but I just didn’t care.. lol! How ever – it was a very sweet and talented group!

Then right after the jazz, we (me, Mysti and Kimmo) taught our rehearsal BODYJAM® class. And yes – it was a rehearsal.
Mysti arrived from the US yesterday, her luggage didn’t.
Kimmo came straight from holding BODYPUMP®-ATM.
And, I was obviously teaching right before.
So we didn’t have the chance to talk to each other, non the less check any details. We just pushed play – and went!
It wasn’t super tight – but it felt good to actually teach the class for real together. And then we could clean some stuff afterward.

And – in case we missed our differences ourselves – we always had these participants that actually had the energy to point (read scream) out where they were during class… but hey – we’re in Sweden. 😉
Anyhow – today we will do soundcheck and staging in Globen.
And, I even have the time for some own BODYJAM®polishing – luxury

I’ve chosen not to involve in anything else than my class this year – at Super Saturday.
For example, the annual trainer show case performance – where the trainers demo a bit of each and every program…
I felt that after the past weeks choreographing and rehearsing all kinds of dancing and other stuff – and also with all the things coming up – I just didn’t really have the time to put into it.
So, I’ll just cheer my co-workers on for that one instead – and it totally feels like the right priorites now.

And later on, I’m off for the last class of the week tonight.
It’s a pure dance lesson, so much fun. I’ve missed teaching like that – and in that kind of environment!

Happy weekend y’all!
I hope I’ll see some of you in GLOBEN tomorrow – especially on the dance floor around 1.45! Yeah! 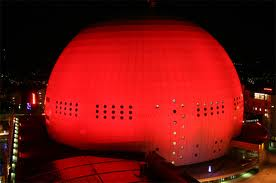