I’m in Copenhagen, Denmark, this weekend for an initial training module in BODYJAM®. I’ve got 14 smokin’ hot ladies that are going to jam themselves to happiness, or at least jam their asses off for three days and become BODYJAM®instructors.

It’s about three weeks left before it’s time to start with the last quarterly round of 2012. (which means new choreography)
Personally – I think that when you do an initial this close to a qw, you should be allowed do the new (and upcoming) release.
For several reasons…

1. It takes a while to learn a BODYJAM®-release, especially the first one as a new instructor, and it feels a bit mean to the all the struggling newbies, to let them work really hard to learn one program and then they can teach it for about a week or so, before it’s time to switch.
Or, they need to stick with an old release while their co-workers are moving on a new one.

2. I don’t wanna mix two releases (I kind of have plenty of choreos in my head anyway)   so I always wait until I’m completely done with one release before I learn the new one.
And like I said – it’s three weeks left before the first round of qw’s… just sayin’.

But – the office have it’s rules  (if you know me, you know I’ve never been much of a rule-obeyer – if that’s even a word) and I guess I need to kindly stick with that.
It’s not really a real problem. Just a teny tiny something to wish for.

The real problem is that you can’t smoke at the gym – not even in the bathrooms, cause if you do – you can get KICKED OUT.. Can you imagen that?! 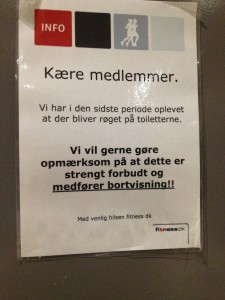 Of course I’m not serious… I most definitely don’t smoke.
But this sign in the locker room is hilarious.

Have a nice weekend y’all!